Is there anything as wonderful in life than to be totally and unconditionally supported by someone?  I think not.  I wasn't expecting to find someone other than my parents who I could include in this category, but then I met my lovely wife.

As previously reported, like 99%+ of the rest of the country, my wife thinks barefoot running is crazy.  And yet, on Christmas morning, I was given a single box containing not one but two (count 'em, two!) pairs of Vibram Five Fingers shoes.  A pair of each the Sprints and the KSOs.  Can you say kid in a candy store?  I was shocked.

I was particularly shocked because the Five Fingers have a very precise sizing system which requires you measuring your feet with a ruler.  Did she just guess?  Measure my feet in my sleep?  Nope.  Measured the impression on my shoe insoles.  Very clever, that wife of mine.

She got it as right as she could have if she'd measured my feet directly.  But still not quite right.  Why?  My right foot comes out at just a hair over 11 inches but my left foot is right at 10.5 inches.  I never knew.  Total freak-show.  I'm off to join the circus.  "Come see the man with different sized feet!"  Okay, maybe it's not that uncommon to have different foot sizes.  I've read somewhere of a barefooter reporting that his shoe size gradually shrank as the muscles in his feet grew stronger.  Maybe mine will even out eventually.

I'd worn them all morning, but had been too busy putting together our Christmas feast to take them on the road.  With the turkey in the oven, I had a bit of time to kill.  My brother, though 2 inches taller, has almost the same foot-size.  He took the KSOs and I the Sprints. 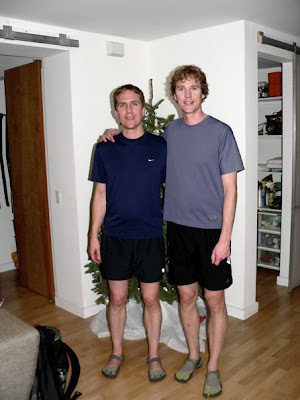 How do I like them?  I like them very much.  They let my feet flex and roll very much like with no shoes at all and protect my feet from all but the biggest bumps.  They're also possibly the most grip-ey foot ware I've ever put on -- they corner like crazy.  Gone are the worries of broken glass, splinters, gravel, and road-borne toxins.

On the downside, it isn't like running barefoot.  I can't feel the concrete and don't get as much feedback from my feet on how to land lightly.  There's still some sense of breaking the mold and stickin' it to da man, but not like being bare.

And then there's the problem of my long right foot.  What problem could this possibly cause?  Well...the amazingly sticky tread covers the front of the big toe.  In my first outing, I lost concentration for a bit and dragged my big toe.  My toe curled under and errrrrrrip! 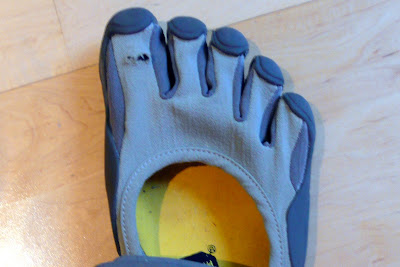 No damage to my toe, mind you.  Is this a design flaw, an anatomical defect, a lapse in concentration or a perfect storm of all three?  I'm not sure, but it's happened on two separate runs so I'm beginning to think it isn't a random happening.  I am finding that concentration is one of the keys that I'm developing in barefoot running.  More on that later.

And my brother?  I was surprised when he told me that he felt like his toes were being spread more than in his regular shoes but otherwise didn't notice much difference.  He's been following his own path of running discovery and trying to incorporate Tai Chi teachings.  More on that later as well.

I'm excited to run in the Vibrams again today.  I think I'll mix it up with some completely barefoot and some Five Finger runs.  Each have advantages and drawbacks.  I'll have to see if one ends up winning.